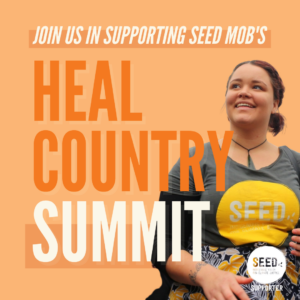 This month we emptied the very full donations box from the shop. A whopping $1,018, generously donated by you our members and customers, has been donated to Seed Mob, Australia’s first and only Indigenous Youth Climate Network. Here is some more information about their work.

Who is Seed Mob?

Seed Mob is Australia’s first and only Indigenous Youth Climate Network – they are a grassroots movement of Aboriginal and Torres Strait Islander young people across the country that are coming together to take action and fight for climate justice.

Seed Mob knows the climate crisis as an issue of social and environmental justice. Too often, those who have done the least to cause the problem, are hit first and worst.

Through Seed Mob’s movement building and training programs, together with their bold campaigns, namely the ‘Don’t Frack the Northern Territory’ campaign, they have been working towards their vision for First Nations people to lead climate solutions and build strong, resilient and sustainable communities.

We are Seed Mob from Seed Mob on Vimeo.

What is the Heal Country Summit?

With an election around the corner, this is the time for Seed Mob’s powerful grassroots network to stand up and fight back – that’s why they’re bringing together young First Nations people from all across the country for their Heal Country Summit.

Over three transformative days online, Seed Mob’s network will receive the training necessary to go back into their communities and roll out their campaigns fighting back against dangerous gas fracking. Here they’ll make sure their volunteer network has the knowledge, support and practical skills to make Seed Mob’s vision for climate justice a reality – for everyone.

The Heal Country Summit will be a defining moment for Seed Mob and their grassroots network. This is their first national volunteer gathering as an independent organisation, meaning the Summit program will be led by and for First Nations people – and that is incredible.

Seed’s volunteer network will be spending 3 days learning, growing, building relationships and confidence to fight for climate justice – and they want to make sure their whole movement could be involved in this transformative Summit too!

That’s why they’ve organised the Land Back is a Climate Solution panel, and you can join them! Here’s what you’ll hear about:

“Across the globe First Nations people have been disproportionately displaced ever since colonisation. Despite contributing the least to the climate crisis, our communities feel the devastation impacts first and worst. This will be an opportunity to discuss and envision what the world would look like if First Nations people across the globe had the right to self determination, and discuss the steps that need to happen for us to get there.” 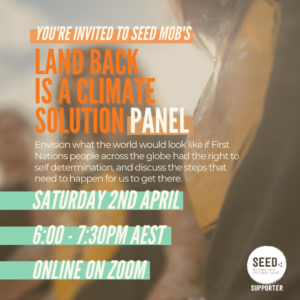 Why you should get involved

Now is the time to act – we’re seeing the impacts of the climate crisis every day. From bushfires, to floods, to increasing extreme weather events, frontline communities are feeling the impacts right now. First Nations justice is a climate solution – we must hand back the power and leadership to those with the most at stake.

We know that to be able to reach the vision of a safe climate future we all want to see, young First Nations people need support, connection and a network of like-minded people to collaborate and take action with. This is the cornerstone of the Heal Country Summit.

The Summit will be a transformative space for hundreds of young First Nations people across the country to be able to create this kind of change.

But it’s going to take everyone standing up with us so we can see real change, fast.

Join in supporting Seed Mob, and help to elevate the voices of young First Nations people. Will you come along to Seed’s Land Back is a Climate Solution panel? This will be a deadly space to discuss and envision what the world would look like if First Nations people across the globe had the right to self determination, and discuss the steps that need to happen for us to get there.