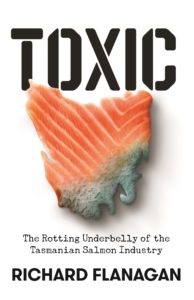 A Tassal spokesman responded to news of this book by saying Richard Flanagan is well-known as a writer of fiction. That is true, but Tassal, Huon and Petuna should remember that he is a trained historian and Rhodes Scholar. This meticulously researched and footnoted book is no work of literature.

What Flanagan does is localise this story. Tasmanian governments have always relied on extractive industries and for more than 30 years the government has turned a blind eye to the ecological death that is spreading from below fish farms and taking over all the waterways and freshwater resources that are part of the commons and culture of Tasmanians.

Tasmanian salmon farming is worse than Norwegian and Scottish farming and this book, along with a film by Justin Kurzel and Conor Castles-Lynch, is a wakeup call. The Tasmanian Government, re-elected on Saturday, will not regulate this industry or undo this damage. The only power we have is as consumers; we must choose not to eat farmed Tasmanian salmon.

To read an extract from the book click here.

A longer extract and link to the documentary by Justin Kurzel and Conor Castles-Lynch as appeared in The Monthly can be found here.