The thing about goats is they are what they eat. And the thing about goat cheese is that the flavour comes down to cleanliness. “It all starts and ends with hygiene – it’s pretty well that basic,” confirms goat-cheese fromagerie, Neil Watson.
Since 1995, Neil and his wife Janette have operated Jannei Goat Dairy on a 40-acre property at Lidsdale, west of Lithgow, starting out by selling raw milk to the Sydney market.
A former agriculture teacher, Neil was raised on a dairy farm in Wauchope, in the Mid North Coast region of New South Wales. He then earned a degree in Rural Science before teaching himself cheesemaking. Janette, a graphic designer who studied fine art, developed the Jannei brand and look and has been helping Neil to manage the dairy and refine the brand’s products ever since. 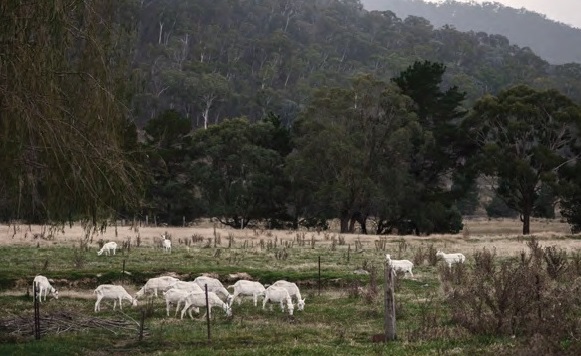 The dairy is renowned for its rich, crisp flavours, influenced by the golden fields, indigo skies and fragrance of eucalypt trees populating the surrounding area. Although Neil offhandedly dismisses cheesemaking as technically simple, the awards Jannei has stacked up prove there’s a tad more to becoming a bona fide artisan. This brings us back to hygiene.
Jannei’s 200-strong herd of Swiss purebred Saanen goats, described by Neil as “Quite finicky and susceptible to parasites and disease”, are the first-line sanitary test for Jannei. These inquisitive yet docile creatures respond well to Neil and Janette’s sustainable and chemical and hormone-free farming practices, producing an average two litres of milk each day.
Janette says Jannei’s unpasteurised (or raw) milk is also influenced by what the goats are fed – natural concentrates, locally-sourced lucerne hay, oats/barley, copra meal and pollard, with other oil grains added in during the winter months.
“We work with the farm and within its limits – we don’t push it,” Janette adds. “But we also have persistence and are open to change and trying new things.”
Naturally homogenised with smaller fat globules than cow milk, thus easier for humans to digest, goat milk is collected and cooled twice daily on the farm. Raw milk for distribution is quickly bottled, with no chemicals or preservatives added. 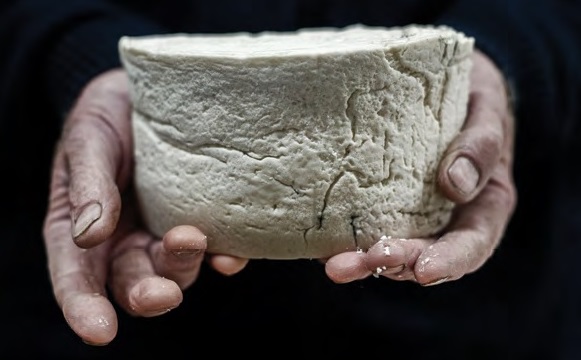 Cheese is made when a vegetable-based rennet (a set of enzymes produced in the stomachs of ruminant mammals such as goats) is added to milk for cheesemaking. Rennet’s job is to curdle the milk and separate it into solid curds. The curds are then pressed and washed – very gently. They are not shaken, beaten or whipped but stirred. They might then be reheated, pressed and washed further to produce firmer cheese, with natural cultures introduced to develop stronger flavours.
Soft cheeses are kept moist to allow living enzymes to grow and develop flavours, while harder cheeses such as cheddar are kept dry. The liquid (whey) left after the milk has been coagulated for cheese or yogurt is drained and strained further through cloth, to draw out different properties.
Jannei Goat Dairy produces 11 cheese varieties, including a soft-spreading fresh curd, natural yoghurt and ricotta, an aged cheddar, a firm to crumbly aged cheese and a mellow, camembert-style cheese known as Prairie Cream.
Named after Bent Backs, a book by late Lidsdale local Jim Brown about the coal miners of Lithgow, Jannei’s signature cheese is its Bent Back Chèvre. This ode to the Central West is a white-mould cheese with characteristic blue undertones and can be eaten fresh or aged until gooey with a robust flavour. The first award Bent Back Chévre received was back in 2004, when it was named Sydney Australian Specialty Cheese Association Awards champion and soon became a 17-time gold award-winner in its range.
Since 1998, Jannei has won more than 30 gold and numerous silver specialist-cheese awards and has been Sydney Royal Easter Show’s most successful exhibitor in the goat-milk class three times.

Jannei’s hygiene standards are so high, it’s the only dairy in New South Wales – and one of only six in Australia – listed by the Australian Raw Milk Movement as holding a license to sell raw goat milk. “There is lots of testing and many hoops to jump through,” says Neil with regards to going through the licensing process. The results are clearly worth the effort. While some goat cheese can have pungent flavours and aromas, Jannei is renowned for its mild-tasting fresh and semi-hard products.
Personally, Neil prefers the sweet and creamy subtlety of fresh milk to the barnyard funk of older milk and products made from milk during breeding season, when strong smelling hormones affect the flavour of the females’ milk.
“Goat milk spoils really quickly if your utensils and milking machines aren’t kept clean, and it takes on a ‘goaty’ flavour,’” he explains, again bringing Jannei’s ongoing success back to good practices.
It is Neil and Janette’s attention to hygiene and detail that keeps customers coming back. Their cheese is used in several Sydney restaurants and is sold at a number of select retail outlets in Sydney and the Blue Mountains (including the Co-op).
Cheese lovers can also visit the Jannei farm gate shop throughout the year, and pre-booked guided tours are available for groups.

This article first appeared in Harvest Blue Mountains + beyond and is reprinted with permission.