Fresh or dried fruit – what’s best for you? 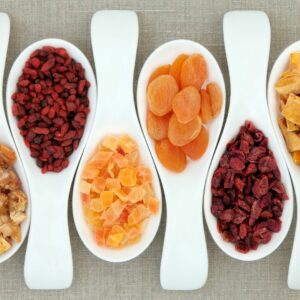 Dried fruit is a popular snack food, and is added to everything from breakfast mueslis to Christmas cakes. It’s commonly promoted as a natural alternative to sweet treats, but is it a healthy addition to your diet? Naturopath, Sonya Byron takes a look at the healthiest dried fruit options.

In general, dried fruit is rich in fibre, vitamins, minerals and antioxidants (especially polyphenols), but is also high in sugars, carbohydrates, and kilojoules. Because dried fruit is smaller and more concentrated than fresh, whole fruit, it’s easier to overeat. For this reason, dried fruit is best enjoyed in moderation as part of a healthy diet. A 30 gram serve or approximately two tablespoons per day is enough for most people. More may be appropriate for some, however, especially if they have a smaller appetite/have difficulty gaining or maintaining their weight, or are an endurance athlete, for example.

Many commercially available dried fruits have added sugars, fruit juice concentrates, and/or preservatives, such as sulfites. These increase the kilojoule content of the fruit and can promote allergic reactions and other symptoms in susceptible people. Choose from among the natural, organic dried fruit options available at the Co-op. 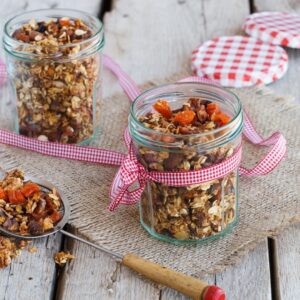 Make your own fruity breakfast treat that’s also good for you.

Basic ingredients to combine for a batch:

To serve: Eat as is with your choice of milk or milk substitute or try overnight muesli: 3/4 fill a jar with muesli, top with some fruit if you like, and cover with milk. Seal the jar and place in the fridge overnight. Give it a stir  before enjoying with a little extra milk if needed. NB: some flakes or puffs may not be suitable for overnight muesli.